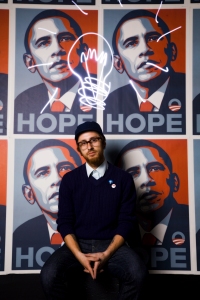 Today I have seen a new hope in the eyes of many of my African American friends. I have seen a hope that has been long coming. A hope that was only a dream in the heart of a martyr.

As a person of God who happens to be a white male I know all too well the full forced bias that lies in the heart of Uncle Sam. Every day I live it among the underpaid and the oppressed people who have been closer to me that any other race on the planet. I see it all too well that the oppression that has been going on in this country for the last 400 years has seen the breaking of the dawn.

Raised to a predominantly religion-less extended family in the south the influence of racism has not been far from me. I was raised to know and partake in it. At Thanksgiving and Easter evil jokes were spoken over meals that were sacred and holy in other homes but in mine they were infested with darkness. Members of my family were partakers of racism on a scale that now only God knows. And from an early age I was very confused by it all. I was raised in the inner city of charlotte where most of my friends and teachers were African Americans. It wasn’t long that I began a life long fascination with Martin Luther King Jr. that has shaped all of who I am and even now continues to form all I do.

I remember my friend Mr. Richard who lived in the civil rights movement and was not a fan of Martin Luther King. He said that what MLK was saying was stirring up the pot and Mr. Richard knew plenty of folks who were beaten and hard pressed because of what King would say and do. On behalf of white men and by the grace of God I always sought to help heal the deep wounds that Mr. Richard had endured. I would ask him questions and listen with a humbled ear knowing that I would never really grasp what it is that Mr. Richard felt. It took me back that he would use an overly respectful tone with whites that use to chaff me. Not because of any insincerity in his voice but because I could hear the almost trained fear that rain deep to the heart of this sweet old man. Mr. Richard died about 6 months ago in his eighties, and I have never been so troubled by a friend’s death. But regardless of where you stand today coming from me I am praising God that there is now hope in the eyes of the long time oppressed.

It is a Cinderella story if I have ever heard one that a people who were once enslaved and oppressed now by the grace and beauty of God stand to lead us. It is fitting and it is right, I don’t agree with all of the policies the democrats stand for but I do believe in Obama and for the first time as a mature adult I am proud to be an American.

One thought on “Racism and Obama”