Luke 9:23 “If any man will come after me, let him deny himself, and take up his cross daily, and follow me.”

In our Christian-American culture divided down the middle by partisan political views, I find that I am best described as a Christian Extremist. Let me elaborate… In light of the culture we live in “carrying our cross” has largely been interpreted as some of our issues we face as we pursue the American dream. For example my Mercedes came with 18 inch rims not the 22s, I just gotta bear my cross. Okay so maybe that’s too much, but you get the picture.

We have misconstrued persecution to being largely related to our issues we put on ourselves related to our loose living. When the kind of persecution folks like Paul talks about in 2 Cor. 4 is the kind of persecution that comes as a result of the exuberant radiating God-fumes that comes from a person living the resurrected life. Jesus was rejected most of the time because He freaked people out. Not because of His political views. When He cast out the thousands of demons from the guy by the graveyard the people from the neighborhood told Him to leave. Paul was stoned because he was radically changing folks lives not because he was using Christian language and judging others.

So where have we gone wrong? How do we redirect our passions to rightly live in the God life we are suppose to be living?

Get hung up on the cross.

The cross is where we lay down our flesh and blood lives, that have opposing desires from God. Jesus says that this is a daily task. We know this well, because we usually end up realizing that we let our flesh and blood selves live out most of our lives while experiencing little to no life from the peace-making plateau of the resurrected life.

But can we be real here? We must realize that this cross bearing is tricky and it ain’t easy.

In the strange film Momento, Leonard the main character suffers from short term memory loss. The entire movie is about how Leonard is trying to figure out the murder of his wife and pursue revenge, but with no short term memory. 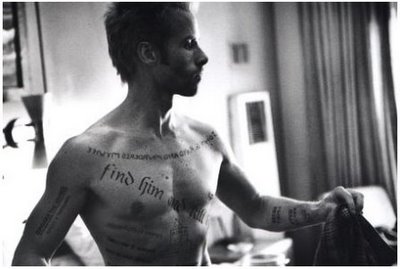 To compensate for his lack of memory he tattoos on his body important pieces of information so that each day when he wakes up he will be able to continue on his journey. Strange film, maybe or maybe not worth your time, but…

Like Leonard we wake up each day forgeting who we are, what our lot in life is, who we are called to be, and to a large extent which way is up.

So like Leonard there are practical ways that we can make ourselves remember to pick up our crosses each day. The thing is that our morning discipline doesn’t start in the morning, it starts the night before. We must plan to put ourselves at the feet of Jesus… even if it’s more like a bear trap.

So may the cross be before you and the world behind you. May you find ways to remain on the alter so that your life would be a pleasing aroma of sacrifice to the Christ.

Matt 16:25 “For whoever wishes to save his life will lose it; but whoever loses his life for My sake will find it.”