On the Bright Side, a column I write for the newsletter at work
By Jason Goodnight 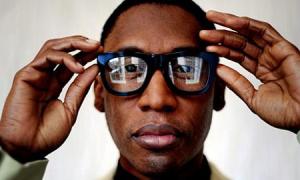 I was listening to Raphael Saadiq’s newest album the other day when I decided to look him up online to see what he was all about. Interestingly, I found out that Raphael had a really tough time growing up. Raised in Oakland, California, at a very early age Raphael experienced the loss of three brothers and a sister due to various urban tragedies. As shocking as it was to hear that this was Raphael’s past, it wasn’t so surprising. Somehow I knew he had a hard past, not because of anything specific that he had said, but there was something in the depth of his lyrics and in the way his songs resonated with me. This was the life of a person who knew hard times… a person who had gone through some stuff.

It seems to me that we avoid the difficult times and pretend like everything is always lovely and yet all of us can agree that the hard times have shaped us the most. It was in those times we found out who we really were. However, we avoid the tough times because we are hesitant to endure the stress of the situation. Doubts creep in. How will we cope? Who will be there to help us along? How will we survive it? Being hesitant and avoiding hard times is a logical response. The problem occurs when we deny the reality of the wounds that we’ve already sustained. It’s as if our fear of going through tough times has desensitized us to the present reality of what we have already gone through.

From my experience, I believe the wounds from our past can be at the root of various forms of addiction, social disorders, and even clinical mental disorders. We can be living in depression, sadness, and isolation without even knowing it. Something that happened to us many years ago can be negatively affecting the way we see and experience life right now. The thing is, we have to quit being bullheaded and face the music of what’s really going on inside of us. Raphael Saadiq has 12 Grammy nominations and a highly successful music career and is not living in a homeless shelter off Tryon St. because of the way he dealt with his hard times. It’s why his songs speak to the deep places of other humans. He experienced the toughest tragedies and found a way to not only regain his health but to use them as strength.

I guess it would be nice if every day and every year was predictable and consistent. But we can count on them not being so. Life is an ever evolving adventure with twists and turns, awful times and awesome ones.

A dear friend of mine likes to say “Be nice to people, you don’t know what they could be going through.” This is so very true about our peers and the way we should interact with those around us. We should be gentle to one another and forbearing. We have no idea what kind of heartache they may have. Yet, with just as much enthusiasm I say to you that you should be gentle with yourself, for you may be unaware of what you are going through. This thing of being human, being flawed, and yet being great is an experience to embrace, to cling to, and to learn to master. May this New Year bring a new opportunity to embrace the past, becoming strengthened by all of our experiences, while we look forward to the future, come what may.